Spartan Mosquito Eradicators are extremely effective in controlling and decimating mosquito populations. The Eradicators eliminate active “hunting” mosquitoes, many of which are females preparing to lay eggs. Once deployed, the Eradicators will work together to form a barrier to “catch” hunting mosquitoes by emitting the same attractant triggers that draw mosquitoes to people and animals. Mosquitoes that feed will perish and are not able to reproduce. The mosquito population will suffer dramatically in the first 15 days and will be 95% controlled for up to 90 days. 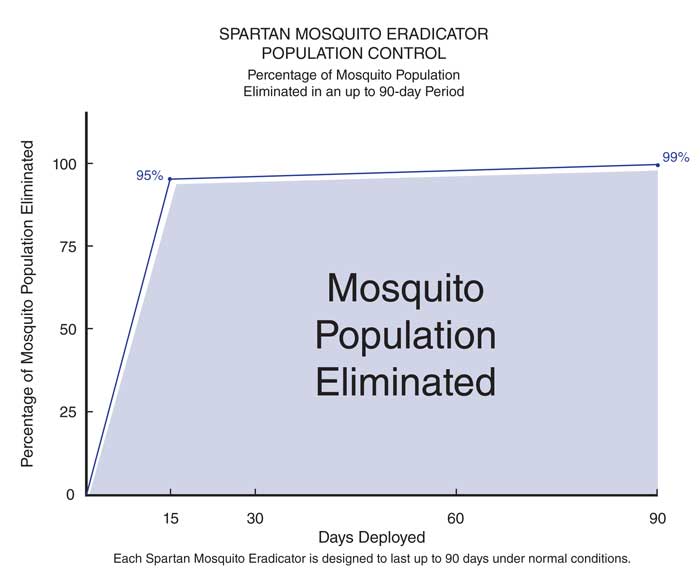 Spray services are intermittently effective, expensive, and their recurrent costs add up over time. Plus, they can be potentially harmful.

The American Mosquito Control Association, a scientific, educational, not-for-profit group that is devoted to the suppression of mosquitoes, does not endorse the use of timed misting systems. These put unnecessary pesticides in the environment that kill non-target insects and promote resistance in insect populations.

Bug zappers have been proven ineffective in killing mosquitoes. Studies have shown that they fail to attract mosquitoes, and instead kill thousands of bugs that are harmless and necessary to the ecosystem, such as moths and fireflies. Lanterns, Candles, and Torches

Candles and torches emit smoke to confuse and ward off mosquitoes. They have a limited effective radius (they normally claim up to 15 feet, but sometimes have an effective radius of six to seven feet when the air is still) and are subject to winds and breezes, rendering them close to useless.

Spray-on repellent used on the skin is a summertime go-to to provide temporary protection, but finding one that isn’t full of harmful chemicals can be challenging. Synthetic repellents containing the DEET chemical compound have been used for over 50 years, but they do have shortcomings. Any spray containing organic solvents has the capability to dissolve certain plastics, and can also be an environmental pollutant. So, while spray-on repellents can be temporarily effective in warding off local mosquitoes, they do not decrease the mosquito population, only work for a short amount of time, and can pollute the environment.

Forget about unpleasant and ineffective sprays, repellents, candles, and costly monthly spray services. Do not settle for odors, inhalable airborne particulates, or applying chemicals directly to skin and clothes, and instead invest in an effective, continuous solution.

Protect your environment from mosquitoes. Invest in Spartan Mosquito Eradicators and take back your outdoors the Spartan way!